Zakkiyyah Najeebah Dumas-O’Neal, James Kao, and Ann Toebbe—three of the artists included in Goldfinch’s group exhibition “A mirror, a dish, a window”—will be in conversation with Elizabeth Lalley, exhibition organizer and assistant director, discussing their work as it relates to the intimacy of interior space and its connections to time and memory.

Presented as part of the Chicago Gallery Open

Dominique Knowles: The Solemn and Dignified Burial Befitting My Beloved for All Seasons

Please visit the link here to view the presentation on Hook. Read more about the exhibition on our website. 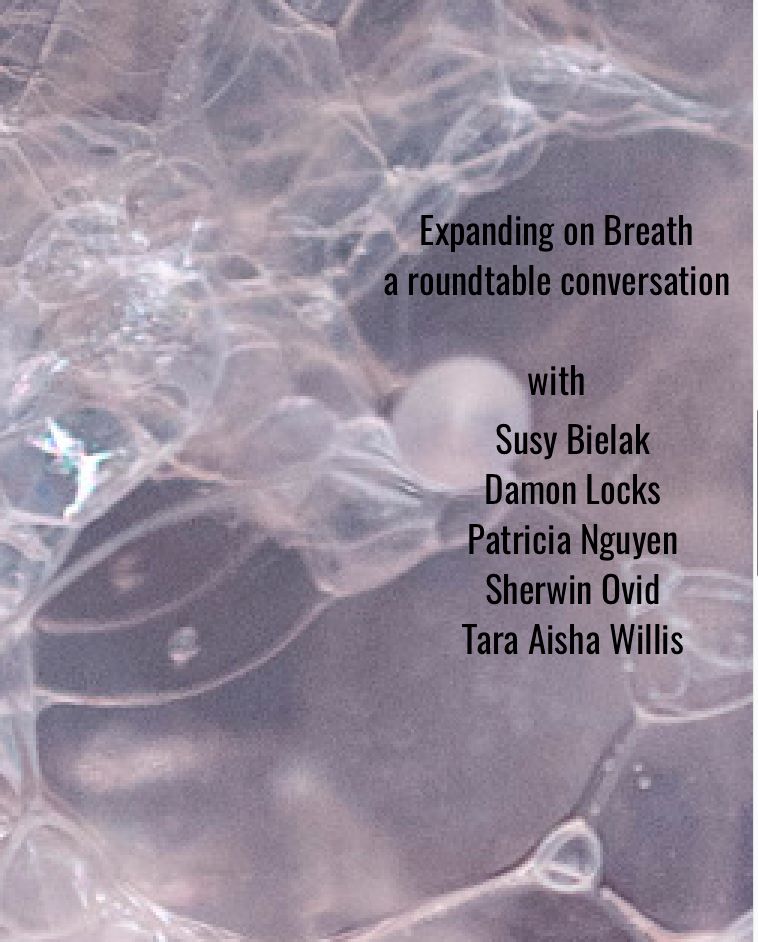 About “Expanding on Breath”: Breath and breathing, as a material, an action, a sign of vitality, a human right, a resource, a politics and a fraught signifier will be the subject of this roundtable artists’ conversation. Join us online for a discussion on Zoom and streamed on Facebook Live with five artists and practitioners who will share their thoughts and ideas about what breath means and how breath is showing up in their lives right now.

Susy Bielak is an artist, writer, curator and educator.  Her work has been collected and exhibited widely, including by the International Print Center, Museo Tamayo, San Diego Museum of Contemporary Art, and Walker Art Center. Her artwork and writing have been published in Art Papers, Poetry Magazine, and New American Paintings, among others. Bielak received her MFA from the University of California San Diego. She is a 2020-21 BOLT artist in residence at Chicago Artists Coalition, and currently a consultant for the American Academy of Arts and Sciences. Her collaborative with Fred Schmalz, Balas & Wax, is currently in residence at Grand Central Art Center with support from the Andy Warhol Foundation. With the Helsinki-based choreographic team Thar Be Dragons, they are part of Tanssin Talo’s current SPARKS production development cohort. www.susybielak.com; www.balasandwax.com.

Damon Locks is a Chicago-based visual artist, educator, vocalist/musician. He attended the Art Institute of Chicago where he received his BFA in fine arts. Since 2014 he has been working with Prisons and Neighborhood Arts Project at Stateville Correctional Center teaching art.  He is a recipient of the Helen Coburn Meier and Tim Meier Achievement Award in the Arts and the 2016 MAKER Grant. He operated as an Artist Mentor in the Chicago Artist Coalition program FIELD/WORK. In 2017 he became a Soros Justice Media Fellow. In 2019, he became a 3Arts Awardee. Currently he works as an artist in residence as a part of the Museum of Contemporary Arts’ SPACE Program, introducing civically engaged art into the curriculum at the high school, Sarah E. Goode STEM Academy. Damon leads a group entitled Black Monument Ensemble and is a founding member of the group The Eternals.

Patricia Nguyen is an artist, scholar, and educator born and raised in Chicago, Illinois. She is the Director of Undergraduate Studies and Assistant Professor in Asian American Studies at Northwestern University, where she also earned her Ph.D. in Performance Studies. Her research and performance work examine state violence, the prison industrial complex, critical refugee studies, political economy, forced migration, intergenerational trauma, torture, and nation building in the United States and Vietnam. Community based praxis and experimentation is a fundamental ethos of her work as an artist and scholar committed to abolition. Patricia has published work in Women Studies Quarterly, Harvard Kennedy School’s Asian American Policy Review, Women and Performance, and The Funambulist. In recent news, she is an award-winning memorial designer for the Chicago Torture Justice Memorial Project, the first monument in the United States to honor survivors of police violence.

Sherwin Ovid earned his B.A. from the School of the Art Institute of Chicago and his M.F.A. from the University of Illinois at Chicago. Currently, he teaches as an adjunct associate professor at Northwestern University and at the University of Illinois at Chicago. This past year, he contributed artwork to Lena Waithe’s Showtime drama The Chi and was commissioned to make a set of original artworks featured in the Jordan Peele-produced remake of the movie Candyman, directed by Nia DaCosta. He has also participated in group shows at the Chicago Cultural Center; the Lubeznik Center for the Arts; UIS Visual Arts Gallery; 6018North; Gallery 400; Prison Neighborhood Arts Project (PNAP); the University of Wisconsin; the Cleve Carney Art Gallery; Julius Caesar; the Haitian American Museum of Chicago and Iceberg Projects. He has appeared twice in the juried publication New American Paintings (Midwest #149, August/September 2020, and MFA Annual #123, April/May 2016) and was named a “Breakout Artist” by New City magazine in 2018.

Tara Aisha Willis performed in a collaboration by Will Rawls and Claudia Rankine and in The Skeleton Architecture’s “Bessie” award-winning performance. She is a PhD candidate in Performance Studies at New York University and Associate Curator in Performance & Public Practice at the Museum of Contemporary Art Chicago. Willis has been an editor for Women & Performance and TDR, co-edited an issue of The Black Scholar with Thomas F. DeFrantz, held a NYPL Jerome Robbins Dance Division Research Fellowship, and recently co-edited/co-curated the dance writing book Marking the Occasion with Jaime Shearn Coan on Wendy’s Subway press. She was the founding administrator of Movement Research’s Artists of Color Council, and was in the first working group for “Creating New Futures,” the COVID-19 responsive guidelines for ethical dance presenting.