In “The Sea Around Us,” marine biologist Rachel Carson describes the formation of the earth’s landscape. Once the crust cooled, rain fell for centuries, breaking down mountains, bringing minerals into the sea. “It is an endless, inexorable process that has never stopped,” she writes. Like Carson, artist SaraNoa Mark thinks of the earth as a drawing made by time. That idea informs the way Mark makes work: by slowing down and being present, by making small gestures that build over time, by situating oneself in time and place.

Mark works across mediums—drawing, sculpture, installation—all rooted in a deep research practice. As an undergraduate at the Pennsylvania Academy of the Fine Arts, they studied painting, wanting a firm grasp on observational drawing. Although their work now takes other forms—clay tablets, repurposed chunks of asphalt, samples of sand—it is still rooted in observation, often in the form of field work. 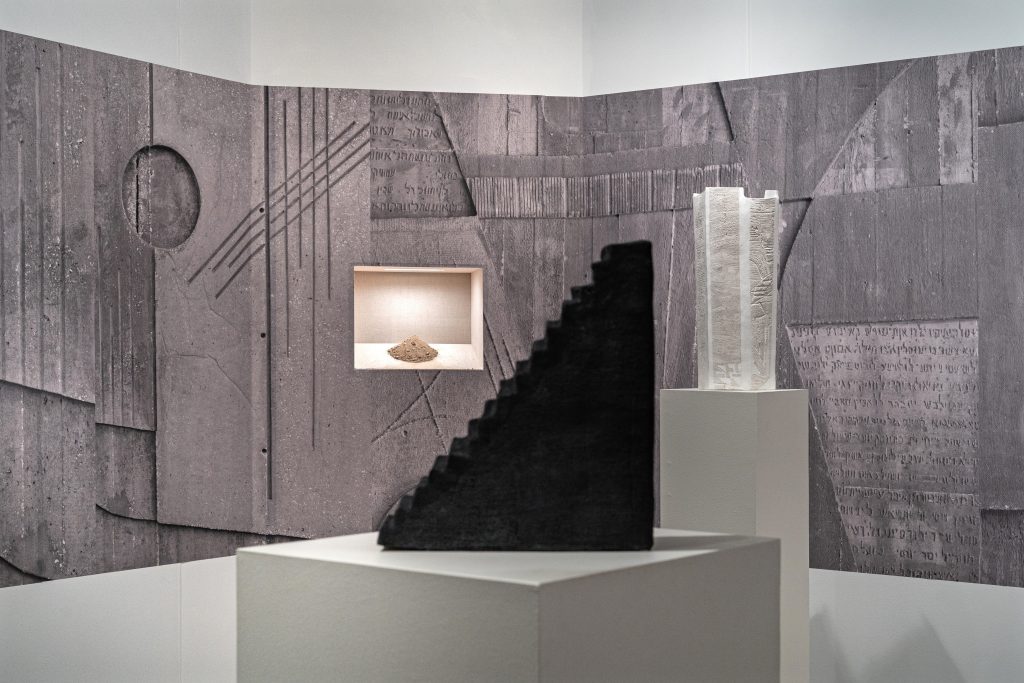 Mark (who uses both they/them and she/her pronouns) has a profound connection to the past, which may stem from their Orthodox Jewish upbringing. Many of her pieces could be mistaken for ancient objects. In college she became interested in drawing as subtraction. Mark started carving paper, then turned to clay, using hand tools to make tiny, repetitive markings. The resulting works, made in neutral earthy tones, resemble Egyptian hieroglyphics or aerial landscapes.

This interest in historical objects was fostered by a four-year period at the Oriental Institute, where Mark thought about how objects are used to tell stories, and which images are prone to survive. This thinking culminated in 2019’s “Temporarily Removed,” her first solo exhibition, at Chicago Artists Coalition. On view were discarded objects from the Oriental Institute’s remodel, including custom-made wall-mounted object holders, hung in rows, as if spelling out a lost alphabet. Another piece consisted of small containers of sand, some the artist had collected from different locales, some they had purchased on Ebay. Mark was interested in what made so many people want to take something from the environment, a stone, a handful of sand, and how that relates to empire, wanting to own something, to control it. Even something as amorphous as land, with borders that shift, people that move, landscapes that constantly transform. 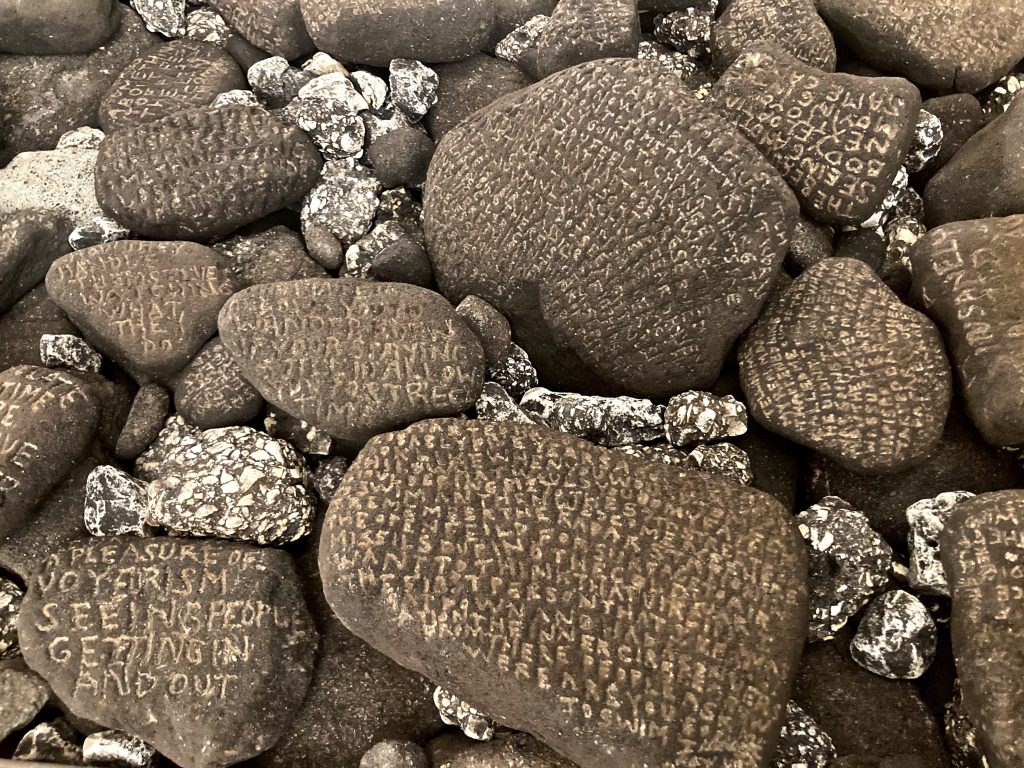 After spending so much time with objects removed from their origins, last year Mark embarked on a Fulbright-sponsored research trip to Turkey to study living rock monuments, “a term for things that have never been removed from place.”

“I make art as a way to exist in the world, but also as an excuse to place myself within situations I want to be spending time in,” she says. In Turkey, they had the chance to visit Hittite monuments and other sites dating back thousands of years. Carved into the sides of mountains, the works have been shaped by the elements over time. When we preserve art, or place it in museums, Mark says, we’re making decisions about what the work actually is. But seeing monuments in their original locations, where you could touch them, or visit them day or night, was a completely different experience. “The artwork is how the body moves through space. It’s how the sun hits it and it’s the sound of birds or the sound of plowing.” 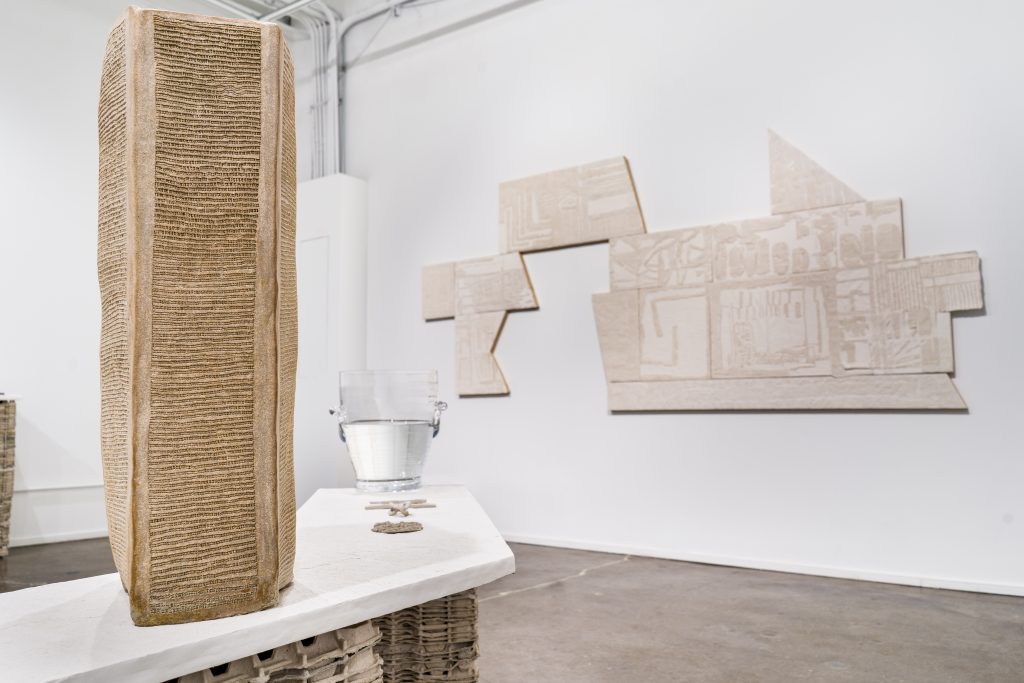 Mark hopes to use this research to make their own public, outdoor artwork. This has manifested in recent work shown at Heaven Gallery. Mark took asphalt stones that washed up on the shores of a South Side beach, and carved into them snippets of conversations collected at the beach over the summer. The stones are part community project, part historical document of a particular time and place in Chicago. New stone works were also included in a solo exhibition this winter at Goldfinch Gallery.

Mark moved to Chicago after college, thinking it would afford the time and space to be inside their own thoughts. Slowly it’s become a real home. Mark is now a co-director at 4th Ward Project Space, and credits a BOLT residency and a studio at the Hyde Park Art Center as formative opportunities. She values every invitation to show, including an upcoming group exhibition at the Chicago Cultural Center. “I just feel so rooted here to the people and everybody making work,” they say. “It feels like such a genuine community. We all keep each other energized.” (Kerry Cardoza)